The Cosmic Tales of Navajo Mythology: Portals to Evolving Worlds


Around the globe, many mythologies talk about gods that came from the sky and their extraordinary feats. Navajo mythology also falls under this context. In the present day, Navajo Indians are in a population of approximately 150,000 individuals who live in a large desert reservation that spans the American states Arizona, Utah, New Mexico, and Colorado, forming the most important Native American tribe in the US. The Navajo Indian reservation is larger than France and Navajo mythology offers numerous fascinating insights into their culture.

It is said that, in the distant past, when humans and animals had a common language, there was a dark first world illuminated by fires which burned inside incandescent craters. From here, the insect people started towards other worlds such as that of birds and locusts. Therefore, this narrative involves travels to unknown worlds, via portals and through other dimensions, and their fascinating cosmic evolution.

In the fourth world the first humans of the Navajo people were created, a myth which explains the mysterious origins of this people. The crossing of the worlds by the first beings represents the journey towards the “Shining World from the Surface.” As for the other worlds, these were destroyed because of the disrespect of the laws given by the gods regarding coexistence with others, with those from the same people, as well as with those from other peoples and other civilizations. Just like in other origin mythologies, the rules given by the gods must be respected to avoid destruction, but there is also forgiveness which allows for a new beginning in a new world. 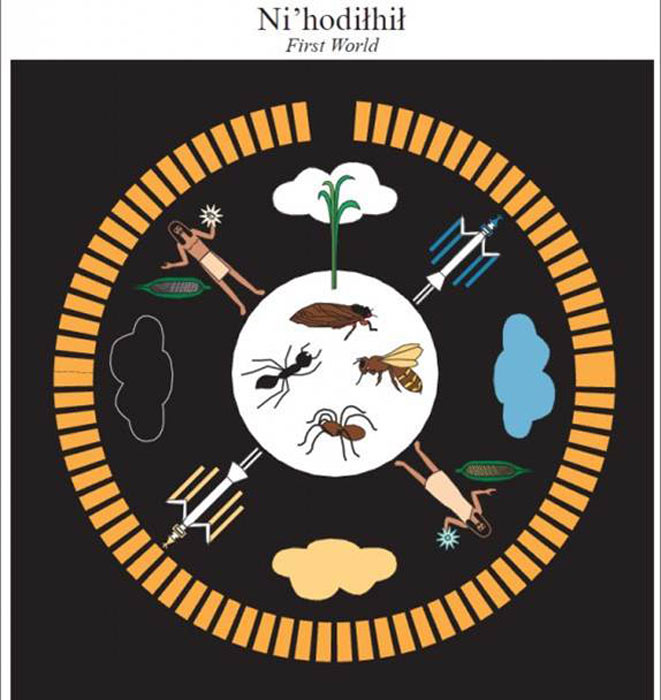 Navajo mythology talks about the existence of several worlds. Therefore, before the discovery of other planets, the Navajo Indians accepted the idea of the existence of other worlds animated by life and other civilizations.

According to Navajo myths, in the first world lived the peoples of the bees, ants, dragonflies, scarabs, crickets and flies. The appearance of the idea of flight in this world is explained by the legend of the dragonfly which made wings for itself and began to move them, raising itself off the ground. It flew towards the sky and the other beings from this world followed its example, beginning to fly as well.

Wanting to escape from this first world of hot craters in order to colonize other worlds, its inhabitants flew until they reached the highest part of their world looking for an exit out of the sky. Still, the sky was solid at that point, and they had to search until they saw a blue light from which a blue head came out, which was a crossing point or a portal to another dimension . In this way, the inhabitants of the Navajo first world succeeded in crossing over to the second world where the war against the birds began.

The second world in Navajo mythology was entirely blue and was inhabited by birds. The bird people did not allow the other peoples from the first world to settle in their world. Because of famine, the war with the birds started and the insect peoples were massacred. The remaining insects flew away once more in search of a new world to live in.

Again, they found a portal in the sky, and they reached the third world where everything was yellow and where the locust people lived. Here, the people lived in peace and harmony, by accepting each other and getting along. However, eventually a conflict made the locusts send away the newcomers. Accompanied by four locusts, they left, again through a portal, to the fourth world.

This new world, the fourth world, was white and black and it was very bright. Here lived the stag, the wild turkey and the Kisani, strange humans who knew how to build houses and cultivate land. This world was very big, and it contained numerous mysteries.

So, up to this point, one can observe the fact that Navajo mythology refers to a multitude of worlds and transitional moments. These include the moment in which a world can become uninhabitable, the necessity of leaving a world for the survival of civilization, portals, wars between inhabitants of various worlds, alternative dimensions, and other things which, in the present day, represent study topics for science. 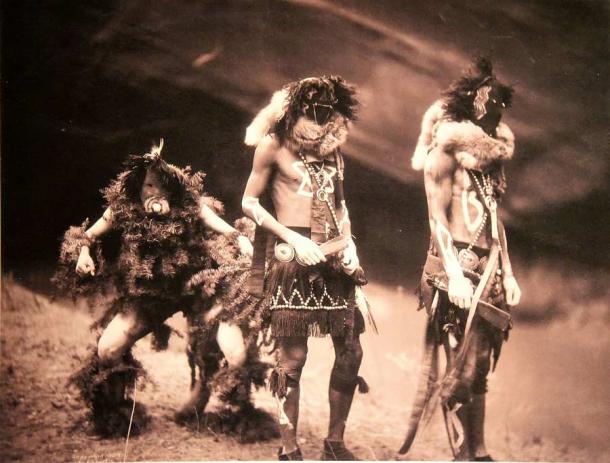 The Creation of Man in Navajo Mythology

They announced to the insect peoples that they were soon going to create humans who would look exactly like the gods themselves. According to the promise, the gods were to return in 12 days. The insect peoples prepared themselves and the gods returned. On a stag skin the gods placed two corn cobs with their tops facing east. After the action of the winds, from the yellow corn cob the first woman appeared and from the white corn cob the first man appeared.

After the creation of humans by the gods, in time more people were born, and the Navajo civilization developed.

Therefore, according to the Navajo mythology, man was created by a much more advanced civilization, namely that of the gods. However, the catastrophe of the flood would hit the fourth world and humans would have to leave for the fifth world. 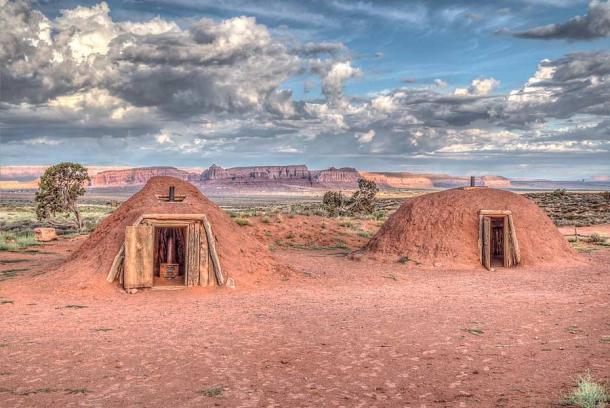 The Fifth World of the Navajo Mythology

As the waters from the flood were growing, living beings had to climb through a stair system towards the sky. Humans had to find an opening in the solid arch of the sky, a crossing point to the fifth world. Finally, a portal was created, and beings could cross over to the new world.

Arriving safely in the fifth world, the first peoples were packed closely on an island located in the middle of a big lake. Surrounding the lake was land, but they could not get there. Then, the Blue Body god, who had brought along four sacred stones from the fourth world, threw the stones in the four directions. In this way, the waters of the lake drained through the holes made by the stones until a muddy road linking the island to the land emerged. So, the gods undertook a kind of terraformation process (literally, an “Earth-shaping” process) to make the fifth world inhabitable for humans.

The road was muddy, but the wind came to help dry it. In this way, humans could reach land. Then, humans together with Blue Body and Black Body modeled the mountains by using soil taken from the sacred mountains of the fourth world. So, by using materials brought from the fourth world, the fifth world was prepared and modified in such a way that it would correspond to the living needs of humans and other beings. 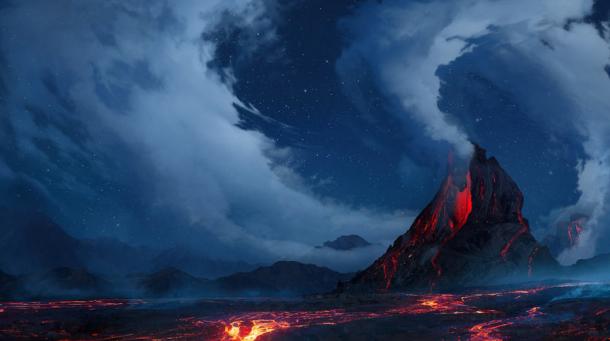 The dangerous mountain of fire plays a key role in Navajo mythology in dealing with the challenges of the fifth world. ( Microstocker / Adobe Stock)

The Mountain of Fire

When the first winter came to the land of the deer, all living beings began to suffer from the cold. Among these there was the Coyote, who was thinking that he would no longer suffer so badly if he could obtain a spark from the mountain of fire. Here a very interesting element appears because many mythologies and legends of old talk about these mountains of fire.

The Coyote managed to convince the woodpecker to go fly above the mountain of fire with a bunch of twigs in its claws. When the sparks would jump on the twigs, they would catch fire, and the woodpecker brought fire back. But she had to avoid the fire-people who could notice her and fire upon her with fire arrows.

Having reached above the mountain, the woodpecker saw the two monsters assigned by the man of fire to guard the flames who resembled two giant flies. As the eyes of these monsters never closed, they noticed the woodpecker and fired sparks upon her. The woodpecker dropped the bunch of twigs and flew back. 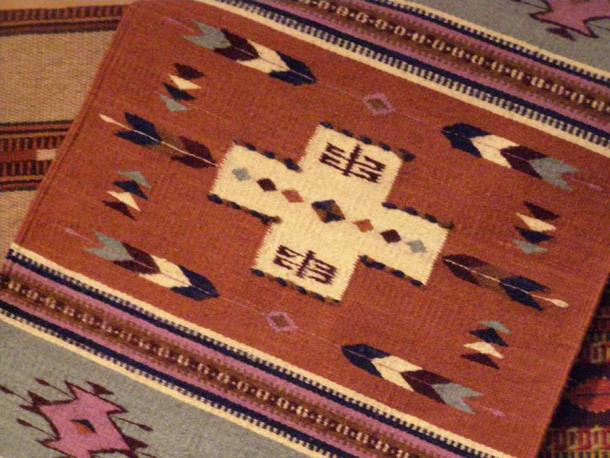 Navajo mythology is woven into the Navajo culture and its legendary rugs. ( PHOTOFLY / Adobe Stock)

After this failed attempt, the hawk went to discover who were the guardians of fire. He studied them in detail during flight and returned to tell the others. After he heard the description of the monsters, the Coyote decided to try and bring back fire himself. He asked the birds to tie a bunch of twigs to his tail and left.

Having reached the mountain of fire , the Coyote managed to fool the two monsters, blinding them. Then, when the flames climbed to top of the crater, he slid the bunch of twigs through fire. It became lit and the Coyote could bring back fire.

This fragment from Navajo mythology is interesting because many mythologies talk about mountains of fire or mountains of metal. In general, it is said that inside mountains metal gods dwell, when they have come to the human world. These mountains are guarded by monstrous beings, the guardians of the gods, and at the time when the gods wish to leave, they disappear along with their mountains of iron.

As for the mountain of fire from Navajo mythology, this could have been just a simple volcano, but it could have also been even more than that. It could have been a place where another more advanced civilization unknown to humans lay hidden and which had as guardians the two monsters. Only one thing is certain, the truth can never be known exactly in the worlds of origin mythologies.