The history of Cyprus is very colorful and shaped by diverse ancient cultures and modern civilizations. As such, it proves time and time again that it is a true treasure trove of historical sites. Visiting Cyprus can turn out to be such an informative joy ride for any enthusiastic lover of history. And any historian that journeys across this spacious island cannot overlook the magnificent Hala Sultan Tekke, a stunning mosque complex that rests peacefully on the banks of the picturesque Larnaca Salt Lake. Hala Sultan Tekke mosque boasts a very long history, and an architectural style iconic among Islamic building traditions. And the fact that it managed to survive through the turbulent ages makes it all the more fascinating! 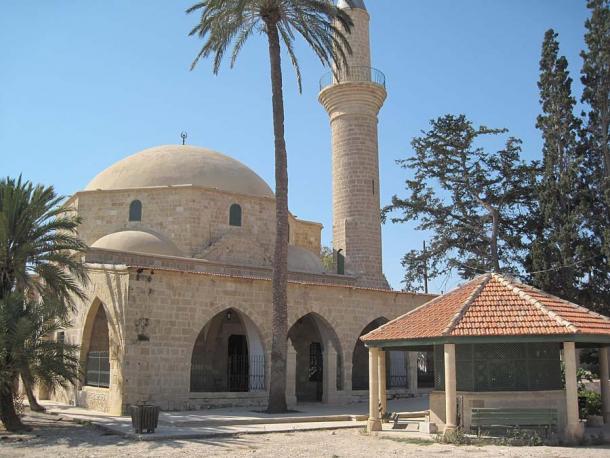 Hala Sultan Tekke is both a mosque and a tekke complex. In the Islam religion, a tekke is a special place of devotion and worship for dervishes of a particular Sufi order. In simpler terms, the tekke served as a monastic sanctuary or a convent, reserved for Muslim scholars, priests, and other religious persons. And as such, it was always a place of great teaching and religious upbringing. But Hala Sultan Tekke is even more special. It is also known as the Mosque of Umm Haram and is a great place of worship and reverence. Who was Umm Haram?

Umm Haram bint Milhan was one of the companions of the Islamic prophet Muhammad . More specifically, this venerated woman was his aunt, and the foster sister of Muhammad’s mother, Aminah bint Wahb. And that makes her a very special historic person for Muslims around the world.

In 649 AD, the Arab armies raided the vast region of the Mediterranean Sea as an attempt to expand the borders of their ever-growing empire. During these operations, the famed Arab governor of Syria, Muʿāwiya ibn Abī Sufyān, launched the first naval operations against the Byzantines of Cyprus .

The Syrian governor sent Umm Haram to accompany her husband, Ubada bin al-Samit (the capable chieftain of the Ansar tribal confederacy and a crucial military commander of the Arab-Byzantine Wars) to Cyprus. Once there, they were to settle on the island and work towards the cultural expansion of the Arab empire. This influential woman was eager to settle in Cyprus.

According to legend, prophet Muhammad disclosed to Umm Haram a vision from God which showed that the island shall indeed be conquered. Between 648 and 650 AD, the Arab forces launched a massive naval attack on Cyprus, with a fleet that numbered close to 1700 vessels. They won a decisive victory, expelling the Byzantines from the island and setting a foothold that allowed them to continue their naval raids deeper into the Mediterranean region . 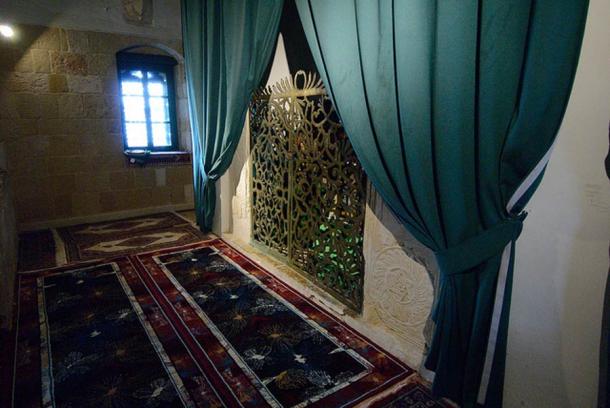 The Umm Haram shrine at Hala Sultan Tekke mosque in Cyprus. She played a significant role in the history of Cyprus. ( Ilmfeed)

The Influences Resulting from the of Arab Cyprus Invasion

Umm Haram landed alongside the victorious forces, and everything was set for her important work on the newly-conquered island. Alas, a series of unfortunate events cut her ambitions short. The legend states that a victory parade, in which Umm Haram rode on a donkey as a gesture of privilege, was abruptly stopped when a Genoese raiding party attacked.

In the ensuing panic, it is said that Umm Haram fell from her donkey, breaking her neck and dying on the spot. History remembers no mention of a Genoese marauding attack, but several sources do state that Umm Haram did fall from a donkey, dying on the spot. Either way, this famed woman was the victim of an unfortunate and nasty fall, and was, according to tradition, buried in the exact same spot where she fell.

Sometime later, a mosque was erected around her grave, and a tomb also. She was a respected and revered woman due to her close relations to the prophet Muhammad, and her resting place soon became a pilgrimage destination for religious devotees.

Today, Hala Sultan Tekke is the chief Muslim shrine in Cyprus, and a holy place for Muslims all across the world. In fact, some sources state that Hala Sultan Tekke is the third most revered site in the Muslim world! Either way, its historic importance is undoubted, especially for those exploring the history of the Arab-Byzantine Wars, and the history of Islam in general.

The Hala Sultan Tekke mosque and tekke complex is situated roughly 6 kilometers (3.7 miles) southwest of the city of Larnaca. And its location, nestled within a lush garden that sits on the west bank of the great Larnaca Salt Lake, with majestic views of the surrounding landscape, is simply breathtaking.

The complex contains a mosque and a minaret, a cemetery, a mausoleum, and special living quarters for both men and women. Of course, the entire complex is today open to all visitors, no matter their religious views. The site offers peace and refuge to all in need of meditation, contemplation, or introspection. 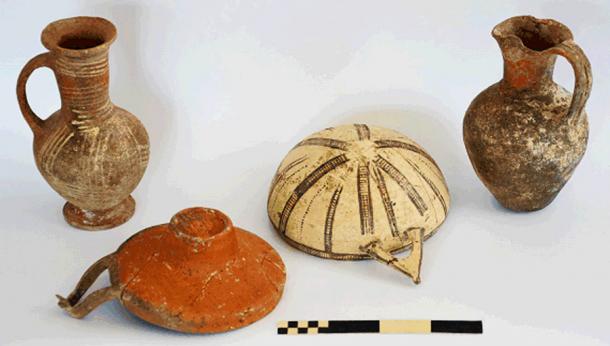 Pottery excavated at the Dromolaxia-Vyzakia archaeological site next to Hala Sultan Tekke. ( Department of Antiquities, Cyprus )

Unveiling the Deeper Historic Layers of the Site

But many are wrong to think that the area surrounding Hala Sultan Tekke was unknown in history before the death of Umm Haram. Archaeological research on the area around the Cyprus mosque has provided some interesting information. Just several hundred meters to the west, a late Bronze Age settlement thrived. It was known as Dromolaxia-Vyzakia and was dated to the second millennium BC. Excavations conducted by the British Museum between 1897 and 1898, led by Henry Beauchamp Walters and John Winter Crowfoot, revealed the remains of numerous tombs dated to the Late Bronze Age (between 1650 and 1100 BC). These tombs were filled with rich funerary goods. Of course, even though the area was thriving during the Bronze Age, by the time of Umm Haram’s death these remnants were invisible. However, these excavations show us that the area was always a place of significance.

In more modern archaeological surface surveys, scholars have discovered further archaeological remains that lie beneath the women’s and men’s guest houses of the complex. These remains have been dated to the Classical and Hellenistic period and possibly extended several meters beyond the area of the present complex. These remains could possibly date to the Cypro-Geometric period, from 1050 to 750 BC, when Phoenician and Greek immigrants began arriving in Cyprus in large numbers. This means that there is a possibility that there were already some complex remnants from very ancient times before the actual mosque was built on the very same spot.

The mosque itself was built many centuries after the death of Umm Haram, in the period when Cyprus was under the administration of the Ottoman Empire. Her resting place was discovered in the 1700s by an Ottoman dervish (religious mendicant) named Sheikh Hassan. Subsequently, Sheikh Hassan managed to convince the leading authorities in Cyprus that the site was sacred and important to the Muslim believers. And so, he was granted leave to erect a small shrine around the grave, which he did in 1760 AD. And this was the first beginning of the modern-day Hala Sultan Tekke. And decade after decade, this religious complex grew in size. Dwellings and water cisterns were built soon after, adding to the prominence and popularity of this holy site. 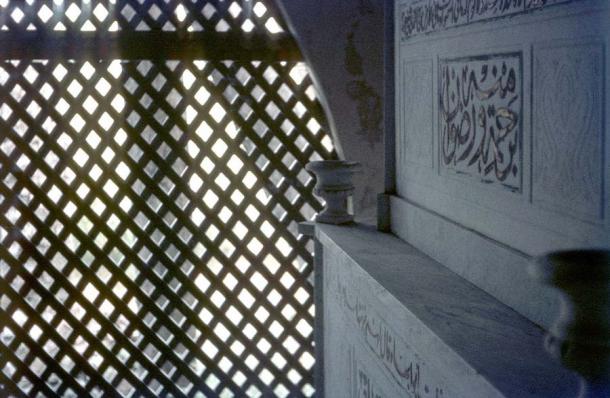 The final resting place of Umm Hiram bint Milhan, the aunt of and one of the companions of Prophet Muhammad, in the heart of the Hala Sultan Tekke complex . (Gerhard Doerries / CC BY-SA 4.0 )

Principally, the Hala Sultan Tekke complex was built in phases. The work done by Sheikh Hassan is considered to be the first phase. In the second building phase, the mosque itself was erected. Its plan was laid out in 1816, and it was done in the classical Ottoman architectural style. The mosque was founded by Es-Seyyid Mehmet Emin Efendi , the then-governor of Cyprus, and its construction was finished in 1817. The third building phase followed soon after, and saw the creation of the convent, and the elaborate drinking fountain, built in 1830. Observing the facade, one can see the portico on the northern side of the mosque. This is a much later addition but does not stand out from the overall layout.

Stepping through the main entrance of the Hala Sultan Tekke, visitors find themselves in the lovely open courtyard that is surrounded on all sides by the tekke complex. The tekke is divided to the north and south sides, reserved for women and men respectively. There is also the all-important mausoleum, one of the central pieces of this religious complex. It is square-shaped and covered by a dome, itself surrounded by five smaller domes on the eastern side. In its center stands the cenotaph of Umm Haram. And to the east of this mausoleum lies a near-modern cemetery.

The entire complex is situated in amidst breathtaking scenery. The tall minaret and the sphered roof of the mosque rise subtly above the lush vegetation that surrounds the buildings. Tall palms and trees, emerging from the thick shrubbery and foliage, give Hala Sultan Tekke the look of a true oasis. And an oasis it is, a religious refuge that can sate the thirst of any devotee or pilgrim. This entire picture is mirrored with uncanny accuracy in the dark waters of the salt lake that stretched almost endlessly from the complex’s edge. 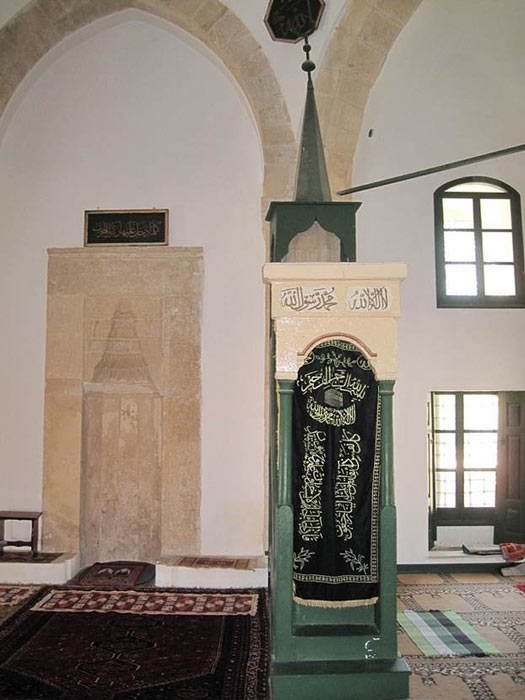 A Religious and Cultural Oasis

The Larnaca Salt Lake is perhaps the ideal site for a religious sanctuary such as Hala Sultan Tekke. Its deep dark waters are perfectly still and home to some rare species, such as the Flamingo (Phoenicopterus ruber) , the Kentish plover, and also seagulls and many species of ducks. Most of these birds overwinter on this lake, contributing to its already rich flora and fauna. Of course, as a breeding area for many species of birds, this lake is considered as a site of major natural significance in Cyprus. And the fact that on its shore lies a majestic historic landmark makes it all the more important.

In the cemetery of Hala Sultan Tekke, beside the resting place of the famed Umm Haram, lies another unique historic character. The cemetery is the resting ground of Hatice Adile Huseyin Ali (Adila Khanum), queen of Jordan . This lady rests eternally in the easterly row of arches within the cemetery. You will undoubtedly note that Jordan and Cyprus are very far apart. The queen is buried here because she had to flee to Cyprus in 1925 when her husband, Hussein bin Ali, King of the Hashemite Kingdom of Hejaz , was forced to exile. She died soon after, in 1929, and was buried near the grave of Umm Haram, since her husband was a 37th-generation direct descendant of Muhammad. 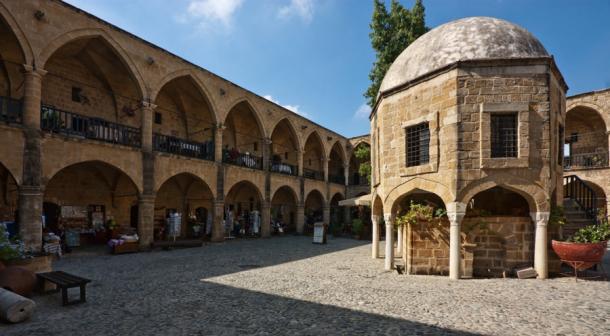 Büyük Han, a caravanserai in Nicosia, is an example of the surviving Turkish Ottoman architecture in Cyprus. (Paul Lakin / CC BY 3.0 )

A Site Respected by Every Good-Natured Visitor

In today’s day and age, Cyprus is a place of turbulent changes. For the most part, the island is separated between its Greek and Turkish citizens. And it is this strife that shows us an important insight into the complex history of this culturally diverse island.

Forever torn apart between Islam and Orthodox Christianity, Cyprus is the historic boundary of two very diverse worlds. But even so, there is no denying the many magnificent historic landmarks that cannot – and will not – be subject to adversity or hate.

Hala Sultan Tekke is just one of the many such historic sites that dot Cyprus. Although a major Islamic site, it is nevertheless situated in the Greek part of the island. But even so, it is undisturbed and open to visitors of all religious views and all nationalities.

Over the ages, many have shown respect and understanding for this holy site that is home of peace and introspection. During the age of the Ottoman Empire, Ottoman ships would hang their flags at half-mast when off the shores of Larnaca, and would salute Hala Sultan Tekke with cannon shots, acknowledging its holiness and respecting its venerable age.